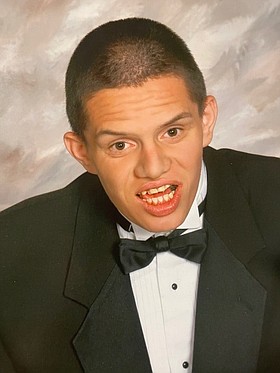 John was born on May 13, 1993 in South Lake Tahoe, CA, to John and Lisa Hoyt. He attended school at Douglas High. John moved to Carson City, NV in 2015 and lived there for the remainder of his life.

John loved his family, nothing made him happier than a visit from them. John enjoyed going on car rides with no destination in mind, being on the move and having a Slurpee in hand was the best of days. If he wasn’t on the move in a car he was very active and vocal. He made his presence known and lit up a room with his contagious personality. If you ever spent just one minute with John, you could tell how pure, genuine and loveable he was. John loved those he met just as much in return, especially if they had a snack for him. John was known for his excitement for life, loud personality, laughter and ability to eat.

John was preceded in death by Grandmother Linda Hoyt, grandfather William Mahu and great grandparents. He is survived by his Father John, mother Lisa, Brother Michael, cousins, friends, family and staff who loved him.