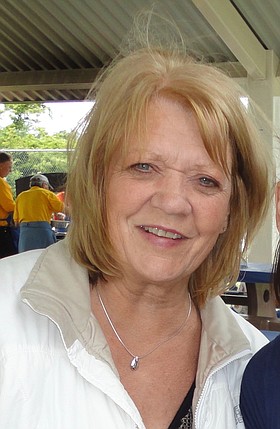 Neva Jo Saulisberry passed away peacefully March 27th in Gilbert, AZ after a lengthy illness. A resident of the Lodi/Galt area since 1987, she and her husband had recently moved to Arizona to retire.

Neva was born August 15, 1955 in Fallon, Nevada. She attended schools in Carson City and graduated from Carson High School in 1973. She met her future husband as a sophomore and the couple were married in 1974. They moved to Columbus, Ohio while Dan finished college and later spent a year in Sioux City, Iowa. Eventually the family of five settled in Galt where they would spend the next 30 years.

Neva worked as a bank teller for F&M Bank in Lodi for several years, but her real passion was her family. She was the nanny to several of her grandchildren over the years until her cognitive decline made that too difficult for her.

She loved gardening, supporting her husband in his career, camping in her RV with family, friends and dogs, taking motorcycle trips with her husband, and, most of all, Knitting, while enjoying her always present cup of fresh coffee.

Her devotion to her family was evident to all who knew her, second only to her commitment to her Savior Jesus Christ. She was an avid reader of spiritual based books along with her many Bibles. The scrapbook she kept leaves little doubt from where she got her inner strength to face the trials of life.

Her legacy will be that of a devoted follower of the Lord, a true spiritual warrior always supporting and encouraging her family. Whether a birthday celebration, a holiday gathering, baking cookies, carving pumpkins, or a family BBQ, home was the center of her life, and she always gave a listening ear to anyone who needed to talk.

Anyone wishing to give in her memory may do so by donating to Faith Community Church in Lodi. Next to being at home, that was her favorite place to be.

A celebration of her life will be Saturday, May 8th at 11:00 am at the above, mentioned church with light snacks to follow at the same location. The service will be indoors (plenty of capacity) with masks required upon entry. However, once seated masks may be removed. Refreshments following will be outdoors.