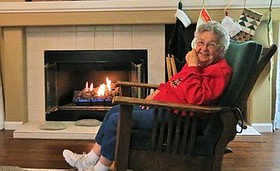 Marguerite was born December 1, 1927 in Medford, Oregon to Weaver & Carrie Walker. She moved to Fallon when she was 5, attended schools there, & graduated from Churchill County High School. Her parents rented out rooms to a Navy couple, which is how she met her
husband, Charles Powrie I, who was in the Navy at the time. She worked for the City of Fallon for 22 ½ years & the school district, working in the lunch program. She moved to Battle Mountain in 1999 to be close to her children.

Mom loved her flowers and was constantly wanting more. She loved to garden, read, bowl, crochet, travel, play piano, and was a lifelong member of Eastern Star. She was a member of the Garden Club. She was inducted into the Bowling Hall of Fame for her 50 years of bowling. She bowled well into her 80’s when her health just wouldn’t allow her to bowl any more. She entered many things into state fairs and won best of show many times for her crocheting. Adventure was her middle name. It didn’t matter when or where she was always ready to go. Photography was in her blood at a very early age. There was always a camera in her purse waiting to be pulled out to take a photo. She was a proud member of Nevada Photographers and loved attending Shooting the West. She also had many things she collected, with spoons & elephants being her favorites. She loved attending all of the sporting events she could to watch her grandchildren, whether it was baseball, football, basketball, volleyball, soccer, or the horsemanship shows.

Services will be held at The Gardens in Fallon, NV with a public viewing on Friday, April 23 from 6 – 7pm. The service will be on Saturday, April 24th at 11:00am. Masks are required. Interment to follow at Churchill County Cemetery. Arrangement are under the direction of The Gardens Funeral Home, 2949 Austin Highway, Fallon, NV 89406 775-423-8928

Special thanks to Dr Willcourt, the Emergency Department, and all the AWESOME staff at long-term care! We will never forget the gifts of compassion & dignity you gave our Mom.