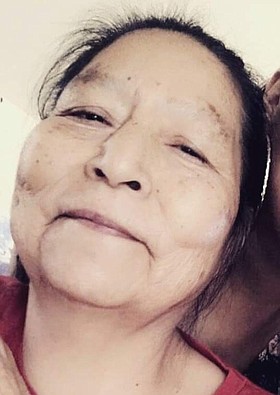 Francine “Herb” Fillmore passed away at her home peacefully surrounded by Family at her side on April 8, 2021.

She is survived by her children Samantha Fillmore, Jeannie Fillmore, Jesse Pacheco, Christopher Fillmore, Leticia Fillmore, along with 8 Grandchildren, 2 sisters Norrine Malone and Ellen Fillmore, and numerous nieces and nephews.

Francine was born in Carson City NV on September 23, 1955 to Catherine Wadworth-Fillmore and Jimmie Sr. She attended the Carson City schools. Herb played native sports, basketball and softball, with her sisters and friends. They played all over Nevada and California. Her team even played against the prison ladies. Her jobs were housekeeping, Nanny, and homemaker. You would always see Herb with a car load of someone’s kids going to school or picking them up from school. Herb was a devoted Mother and Grandmother. She enjoyed watching her children play sports along with her Grandchildren. She would even come out on Tuesday or Friday nights for softball to watch her daughters and son and nieces play.

Herb would tell you, “Don’t let them push you around. You push them back!” She enjoyed Family gatherings. Herb’s house was opened to anybody. She would take you in so you could get back on your feet. She looked forward to having breakfast with her sisters Norrine and Ellen and of course getting the scoop of the day. Herb was very stubborn, but yet very loving. We are going to miss those banana cakes as you all know she made the BEST at any cakes.

Herb will be deeply missed by her Family and friends and anyone who knew her.